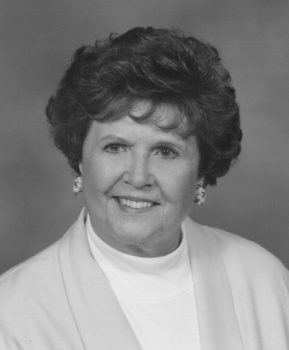 Do not forget to entertain strangers, for by so doing some people have entertained angels without knowing it.

This was the essence of Doris Greig’s life.

The Founder and Author of Joy of Living Bible Studies,  Doris Jane Walters was born in Omaha, Nebraska on March 28, 1926 to a young country doctor and his wife. Her younger brother Stanley was her constant companion in those first formative years.

Doris earned a degree in Home Economics from South Dakota State University. She moved after graduation to Mound, Minnesota to begin teaching at the local high school. It was there that she met and began to date her future husband, Bill Greig II. In 1949 he invited her to attend one of Billy Graham’s first tent meetings. She stated, “After hearing Billy talk, I knew immediately what was missing from my life. I needed Jesus Christ to forgive my sins and to be my Lord and Savior. When Billy invited those who wanted to become a Christian to walk to the front, I was too shy. I remember that he said that if you had not come down in front to receive Christ you could go home and kneel by your bed and invite Christ into your life as your Lord and Savior. And that is exactly what I did. It was the best decision I ever made. Life took on a new joy from that day forward.”

On June 22, 1951 she married the love of her life, Bill Greig II. Doris and Bill were blessed with four children: Kathy, Bill III, Gary, and Jane, as well as nine grandchildren. Doris’ love of children was evident in all that she did. The Greig home was regularly filled with visiting missionaries, people in need, as well as international visitors. Her guestbook was replete with the names of people from around the world. Many of them had never met Doris before they arrived at her front doorstep with baggage in hand, yet she opened her heart and her home to these unexpected guests. Her gift of hospitality and compassion touched countless lives. (In Doris’ book, You Can Do It, Too! Opening Your Heart and Home to Share God’s Love, she shares personal family stories of the growing up years of her children and the unexpected ways God used her, an ordinary woman, to touch the lives of others with His love.)

As a young mother, Doris was forced by illness to stay in bed for a year. The Lord used this time of rest, thought and prayer to launch her writing career. In 1971, Doris was asked to use her material to teach a Bible study. From that first meeting in 1971, Joy of Living has grown to include classes meeting both nationally and internationally. Through her yielded life multiple thousands of men and women around the world have come to know the saving grace of Jesus Christ and have been established in the Word of God.

Doris’ 23-year battle with cancer was a testimony of her strong faith in God. Her life Bible verse, “I can do everything through Him who gives me strength” (Philippians 4:13), was truly lived out through her final years as she continued to teach a Joy of Living Bible study at Community Presbyterian Church in Ventura. She was a mentor to young women and new mothers who attended her class. Her lectures were recorded and made available as a teaching tool to other Joy of Living teachers around the world.

Doris was active in her grandchildren’s lives and she never gave way to her weakened strength to miss an opportunity to be with the people she treasured. She was a gift to us from above and her legacy will continue to many generations through her writings, Bible studies, and her personal touch to those she loved.

Doris passed away in her Ventura, California home on December 20, 2004. A devoted wife, mother and grandmother, Doris leaves behind a legacy of love and humble service to her family, church, community and the world.

Doris was survived by her husband, brother, four children and nine grandchildren. (On February 15, 2006, her husband Bill went home to be with the Lord Jesus and with Doris.)